I can't believe that it's Friday again. So soon!

I'm going to do a double link up this week with Fern from Teaching Blog Addict's FREEBIE FRIDAY. 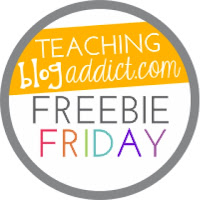 And Doodle Bugs' Five for Friday. 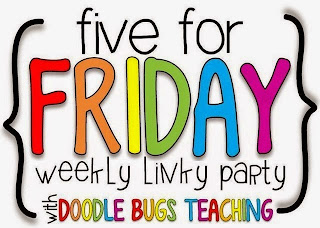 It's been a busy week!  Last Friday we took the ferry from Nanaimo to Vancouver.  We thought we'd have to wait for the 10:45 sailing because it was looking pretty busy, but managed to get on the 8:30 ferry.  Amazing!  We drove into the terminal at 8:15 and pretty much straight on to the boat.
The scenery is beautiful.  This is a photo just as we were entering Horseshoe Bay on the Vancouver side. 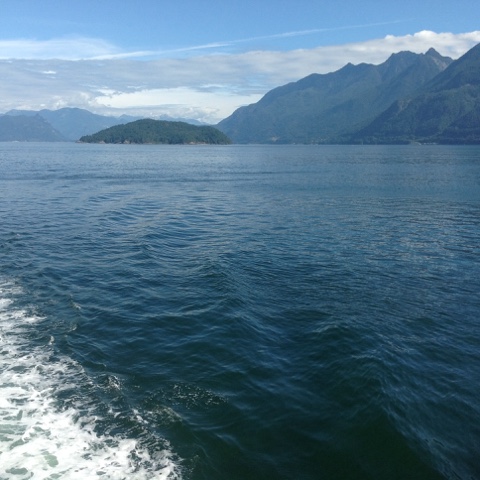 My hubby had a meeting at 1:00 downtown, but we were there so early that we had time to stop in Stanley Park and go for a walk.  Stanley Park is a bit of heaven on earth.  In literally less than one minute you can go from a view like this: 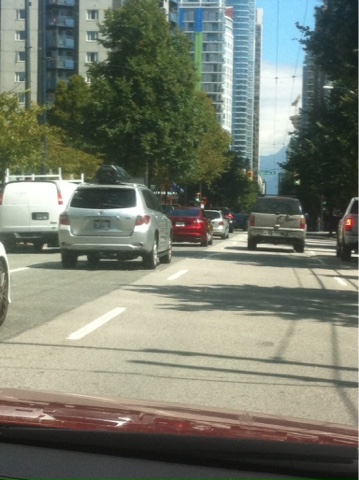 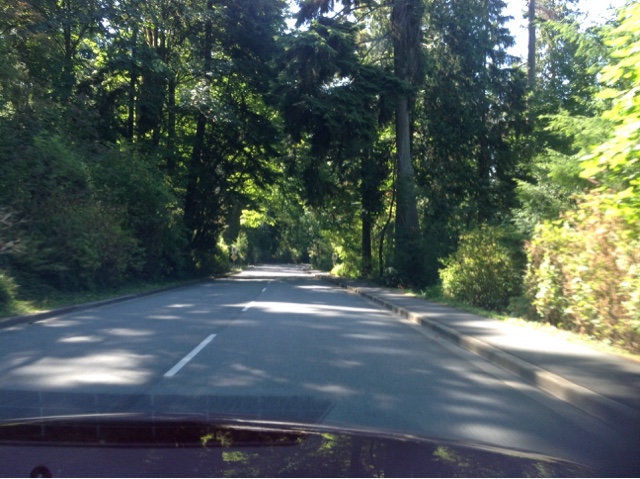 Here I am near Siwash Rock (where a grey whale was spotted yesterday). 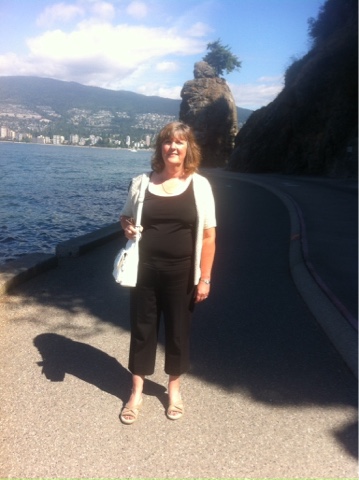 And later in Gastown, the oldest part of Vancouver, looking at the steam powered clock. 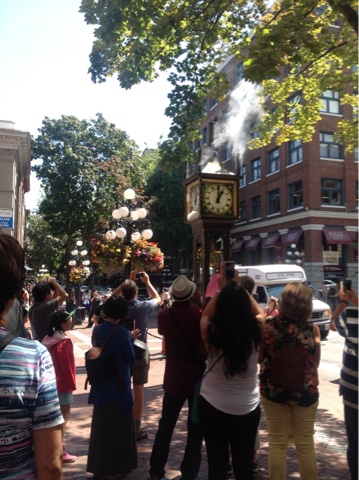 After we left Vancouver we drove to nearby Richmond to visit friends.  On Saturday they took us to Richmond's Marine Days celebration.  They have restored a lot of the waterfront there to what it was like 100 years ago.  There were little houses built on pilings over the water. 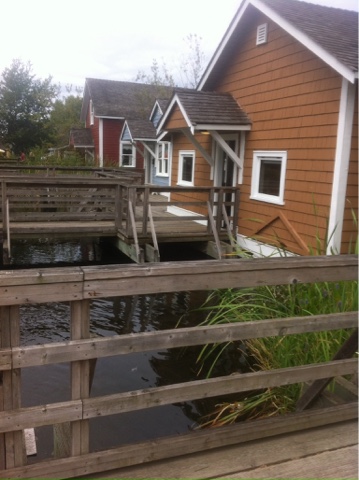 One of the most interesting belonged to a Japanese family.  The mother of the family, Asayo Murakami, had a very interesting history.  She came to Canada as a "picture bride" in 1924.  She had been married to a young man from a rich family, but failed to produce a male heir (she had two daughters and her third child, a boy, died shortly after he was born).  The family decided to get rid of her and sent her picture off to Canada where a Japanese worker in Vancouver agreed to pay her passage and marry her.  When she arrived in Vancouver she took one look at her prospective husband and refused to marry him, saying, "He wasn't my type, too short."  So she worked for two years picking strawberries and working in the cannery and other jobs to pay off her debt to him.  At the cannery she met the man she married and raised 10 children with.  The cannery is now a museum. Great gift shop! 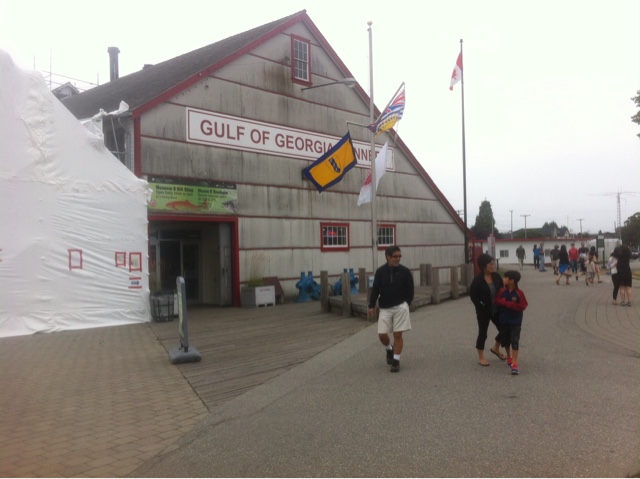 Sadly at the start of  WW2 the family were interned in Alberta and never returned to B.C.  It is a regrettable chapter in our history, but the family came through it and prospered.
Mrs. Murakami lived to see many children, grandchildren, and great grandchildren.  She didn't tell her family about her daughters in Japan until she turned 100 years old in the late 1990's, but they were able to trace them.  Unfortunately one had died only a few years earlier, but the other came out to Canada to reunite with her mother and extended family.
The family has donated many family items to the heritage site in Richmond and have worked at restoring the beautiful garden in the yard.
I can't begin to imagine the heartbreak of losing an infant, then being sent away to a foreign land, never seeing my other two children and husband again (he was not in favour of sending her away because he loved her, but was overruled by his parents).
She lived to be 104!

Richmond has other attractions as well.  One of the best is an abundance of blueberry farms.  We picked up a 20 pound case (oh, oh - I'm supposed to be metric...).
Most of them went into the freezer, but I found a great recipe on the internet and made this fantastic cobbler for dinner on Tuesday evening. I love that the gluten-free included was delicious!

The link for it is HERE or in the picture.
LOL - my husband's aunt and uncle from Seattle are here for the summer and their 2 grandchildren came up to visit them for a week.  They are 10 and 12 years old and were having a great time playing with 3 of my grandkids.  When they all came over for supper all 5 of them were constantly comparing how they said and used different words (hence supper/dinner).  Pronouncing "about" was a particular topic of conversation!

When we got home the garden was BURSTING with tomatoes, cukes, zucchini, strawberries, eggplant, peppers and peaches! Hubby picked these goodies this evening. 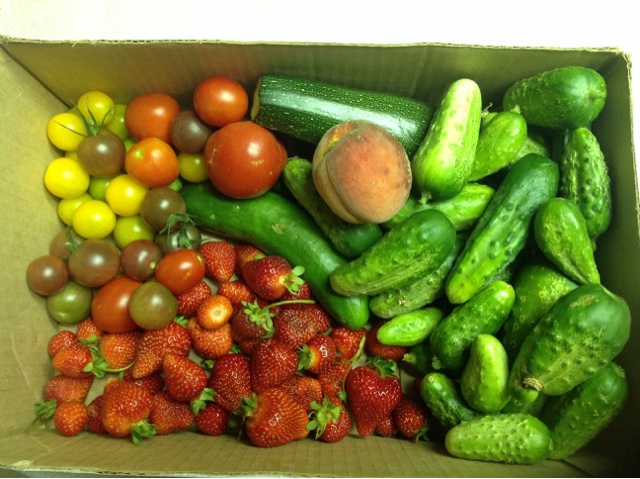 Jack was DELIGHTED to see us when we got home on Sunday afternoon. 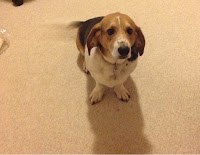 (If he doesn't look especially animated to you, please bear in mind that he's 87 and a half% basset hound) (and it was 100 degrees fahrenheit).
We had a great young couple stay to take care of the garden and look after Jack.  They gathered the pickling cukes and stored them in the fridge.  Yesterday was canning day.  21 quarts of dill pickles!

We don't go back to work until September 8th!!! after Labour Day.  It only happens this late every 7 years and I'm making the best of it.  In May when I was reading blogs about teachers being out for the summer already I was feeling pretty envious, but now.....not so much.  I'm spending some of my time "refreshing" some of the items in my TpT store.  Here are a couple: 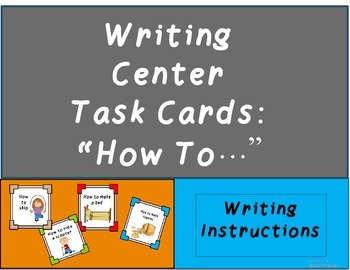 See them in my TpT store by clicking on the pictures.
I've also been getting a bunch of items finished that have been sitting partly done for quite a while now.  No big projects (although I'm working on units for Guided Math which I'm pretty excited about), but I got these three done.  The first is Apple themed task cards with activities:  addition to 8 and odd and even.  I was making them for my firsties last year (I had yukky hand made ones that they were using in Math centers) and now I'll be teaching two's and three's!
Click on the picture to get it from my TpT store. 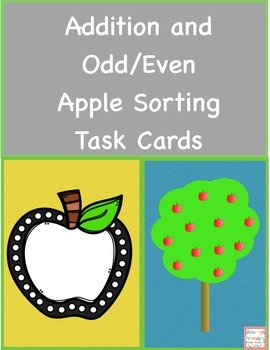 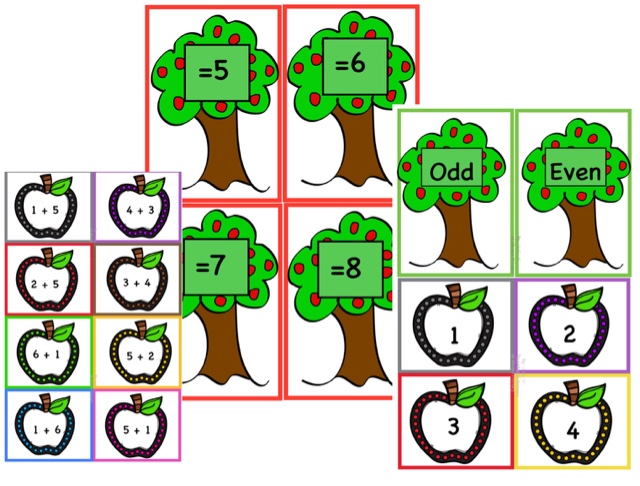 A second Math center activity that I finished is the FREEBIE this week.  Also made for my firsties and not finished!  I've used this activity in my Math centers for years (again they used the not-so-beautiful hand done version, but they didn't seem to notice at all!)
I put out my tubs of manipulatives and they grab a handful, estimate how many, then count them.  Super simple!  Super popular.  The FREEBIE includes 2 recording sheets:  one where I listed the manipulatives I have in my classroom for them to use, and a blank that you can fill in if yours are different.  If you are anal picky about hand done printing you could take a screen shot of it after you download it and paste in text boxes.  LOL! 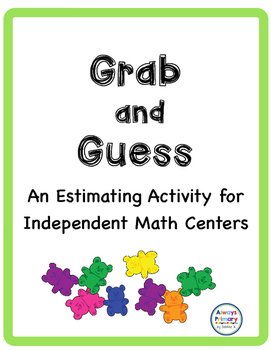